As the plane ducks below the beige haze that sits heavily above the city of Amman, the first flat roofs of the sprawling Jordanian capital roll out before me. It reminds me of the time I was forced to learn crochet, a mess of crooked squares clumsily roped together with wiggly roads and dusty paths. Predominately beige, Amman’s only colour comes from the green palm trees and the Jordanian flag that flies over the city. The driver who picks me up from the airport has a kind face and a strong Russian twinge to his english. He is drinks a syrupy cardamon coffee and holds the soggy cup under my nose for a sniff, pointless because the whole car smells of the spice. He weaves towards the hotel, not bothering to lazily flick the indicator on to signify his lane changes. It doesn’t matter though because the roads heading towards the city centre are empty save for a man galloping a tetchy horse that is wearing a colourful, tasseled saddle. Our car gets so close to the horse that I notice the wild, vibrant look in it’s eyes, a look that matches the rider.

Tourism definitely hasn’t been booming in Jordan since it’s neighbour Syria became the weekly headline news for all the wrong reasons. Jordanians like to say things like “we are a peaceful country with naughty neighbours”, but it is clear that the country is hurting from being unceremoniously dropped from people’s bucket list. On my first walk down Rainbow St, a popular street lined with restaurants and shisha bars, it was puzzling to know why people had stopped coming. The street was lively, bustling with laughing happy people, and nobody was the least bit surprised to see a blonde-haired girl walking down the street by herself. 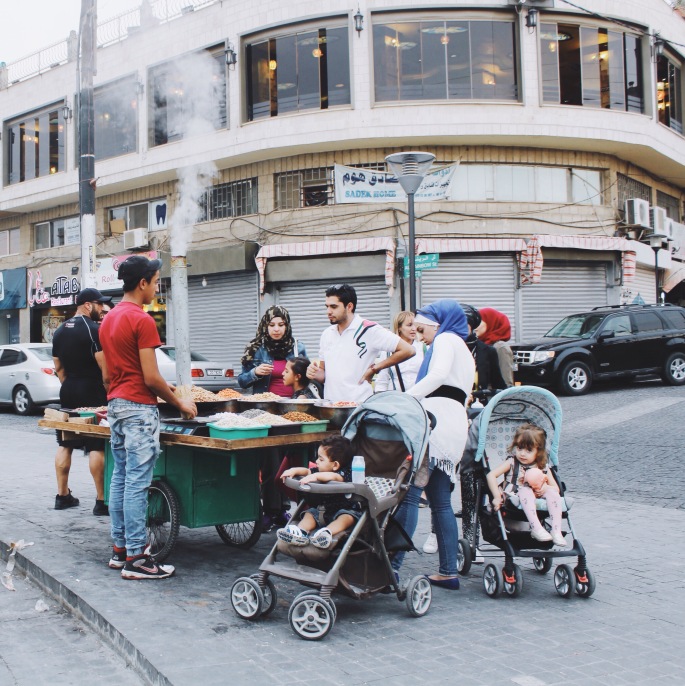 I had come to Jordan with a head bursting full of academic knowledge about ecotourism and it’s impact in promoting sustainability and conservation. What I lacked was a real genuine experience of the concept. I was eager to see an example of ecotourism that wasn’t just an elaborate marketing technique or another way to get people to shell out money whilst positing pictures online about ‘doing good.’ Ecotourism is so much more than having a holiday whilst minimising your impact on the environment. It is much more about offering an experience that is the opposite of what mass-tourism operators are churning out everyday. It is community driven, beneficial for all stakeholders, authentic, and educational. It’s visiting a part of the world and not leaving it in tatters when you get back on the plane home. It doesn’t just benefit one person or one corporation but benefits whole areas, communities, and ultimately whole countries. 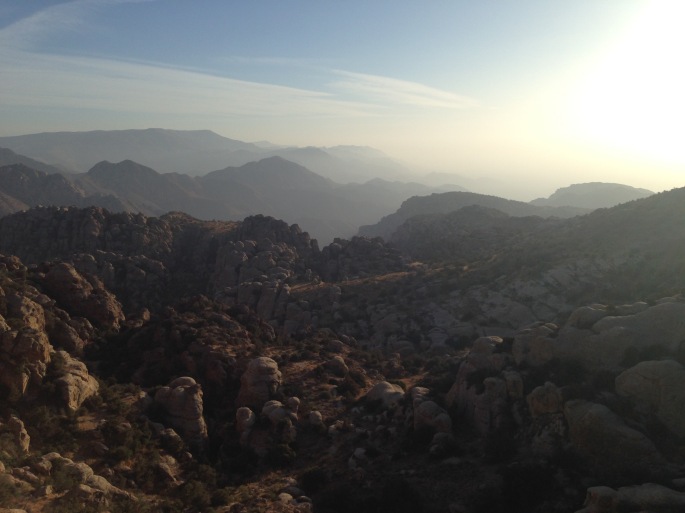 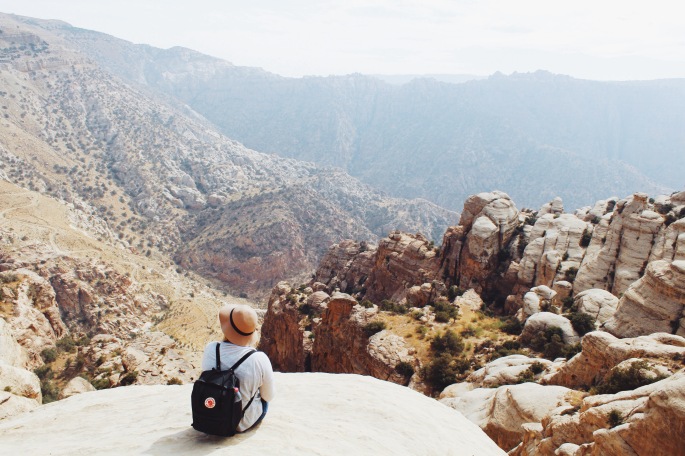 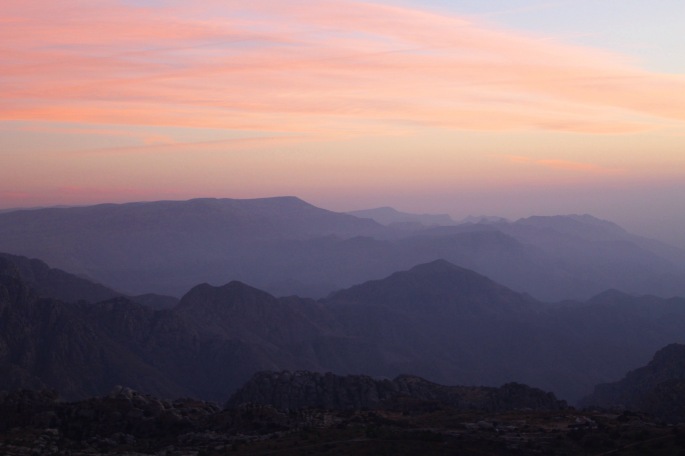 Driving down the ‘Kings Highway’ on the first day of the tour, the desert struck me as being a whole lot of nothing, and a whole lot of everything. The colours were dull and vibrant at the same time. Red dirt swirled with beige sand and rocks mingled with tatters of rubbish alongside the road. The charismatic swirl of arabic covered every building and businesses with names like ‘Restaurant Petra’ had taken advantage of the stream of tourists that had once bused past in the thousands. Shops where 7000 dollar ornate tables mixed with 10 dollar stuffed camels were a dime a dozen along the road, and we stopped at one for a quick break. The salesmen picked through their goods, putting forward things that we might like; apparently I look like the kind of person who would want to buy a heaving pack of beautifying Dead Sea mud.

It was like taking a breath of fresh air when we pulled into the Dana Biosphere Reserve. The rubbish at the side of the road had abruptly stopped at the border. The reserve is Jordan’s largest protected area and would be focus of our MEET trip. American writer Mary Austin once said when talking about the desert “there is room enough and time enough” and certainly the first day of trekking through the Dana Biosphere Reserve eliminated not just the hours ticking by on my watch, but the thousands of years that separated us from the rest of the areas history. Sitting down on a rock meant feeling the grooves of ancient fossils on the backs of your legs and looking high into a cliff face meant seeing the hollow Nabatean tombs that had been dug into the rock. Two things I would definitely have missed if they hadn’t been pointed out by our guide from the Royal Society for the Conservation of Nature (RSCN). The beauty of Dana doesn’t force itself upon you like a salesman desperately trying to offload some mud but rather the reserve’s beauty lies in the mesmerising colours of the rock, the intricate trap of the spiny plants that line the path, and the gently changing vegetation that is a result of the four different bio-geographical zones in the reserve. When the only sound is the soft crunching under your boots and the distant jungle of goats in the distance, the ancient feel of Dana is undeniable. 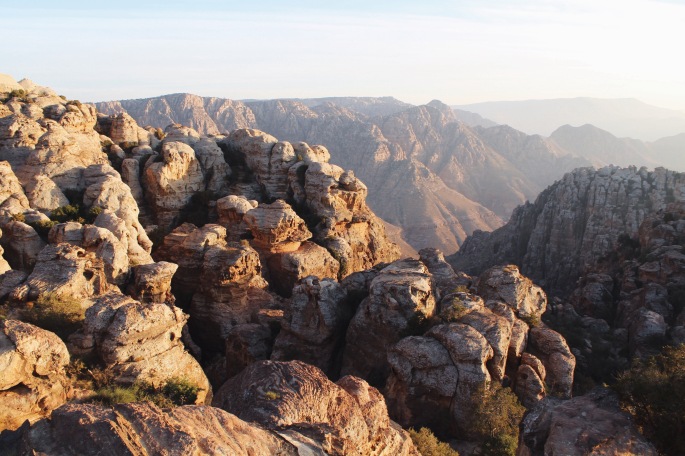 Waking up at the Dana Guesthouse on the second day of the tour, the silence had turned into a chorus of barking dogs and bustling staff. Run by the RSCN, the guesthouse succeeds at walking the slippery slope between simplistic and uncomfortable. Regardless everything is forgotten with the panoramic view of the valley below. A view which would disappear quickly as we started the day’s 14km hike to the Feynan lodge on the valley’s red and shimmering floor. There is nowhere to go but forward and I joke that if we had to turn around and walk the steep upwards path we had just come down, I would resign myself to the life of a bedouin wife and live in the valley forever.

The heat rises as we hit the bottom of the valley. We see the skull of a donkey pick clean by the scavengers that live in the Dana reserve. Even the vegetation has taken a defensive stance against the surroundings and guards itself with long, sharp thorns. As we stop for a snack of dates, tomato, and sickly sweet orange juice, our guide picks up a rock and a small yellow scorpion shoots out from underneath and scurries away with it’s tail raised and ready. That’s Dana. It’s desolate and wild. A whirlwind of reds and browns punctuated by a heavy silence. Where vultures circle overhead and scorpion scurry underfoot. Where small purple crocuses push up from the dry dirt, and lush palms grow along scars of dried riverbed. Where one moment you feel in complete isolation and the next you notice the shock of black fabric of a bedouin tent high in the hills. 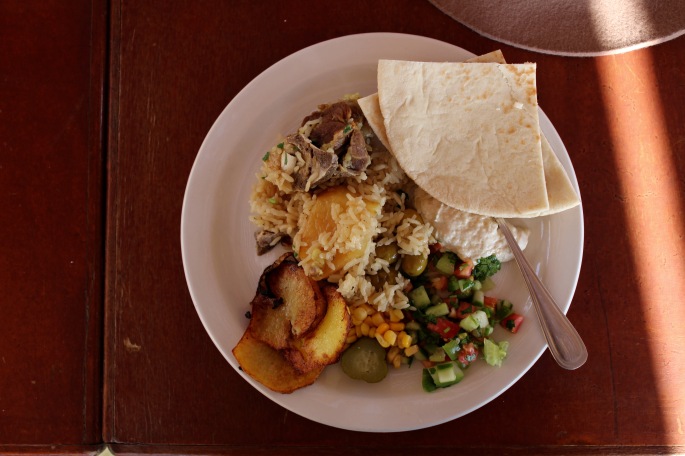 A famous quote in Antoine de Saint-Exupéry’s book the little prince says “What makes the desert beautiful is that somewhere it hides a well” and as the sandy walls of the Feynan Ecolodge appeared around a corner, I knew that we had found the well. Lit up with candles at night, staffed by cheerful locals, and styled with draping fabric, clay, and stone, the lodge wasn’t just a hotel plonked into it’s surroundings. The beauty of the desert didn’t stop at the door of the lodge but invited its way in through the bedouin bread that was served at mealtimes, the handmade clay pots that held fresh water in every room, and the bars of locally made olive soap in the bathroom. It’s is a place to see the stars, do yoga on the rooftop, and sit with a book and a cup of sweet tea and it was there that I truly realised the beauty of Dana.

That night, the skies opened up and it rained. Puddles collected on the ground around the lodge, the rain washing away the dust that hid the reds, purples, and pinks in the rock. I stood on the balcony as the call to prayer rung out in the valley, just in time to accompany a flash of lightening that shot across the sky turning my view into the colour of angry bruise. It was nothing short of magnificent. A display of nature so untamed that when I was thinking of a way to deserve the experience I couldn’t help but think of that horse galloping along the road. Wild. Proud. Primitive. That’s Dana.

One thought on “I Found Wild Beauty. It’s In Jordan”